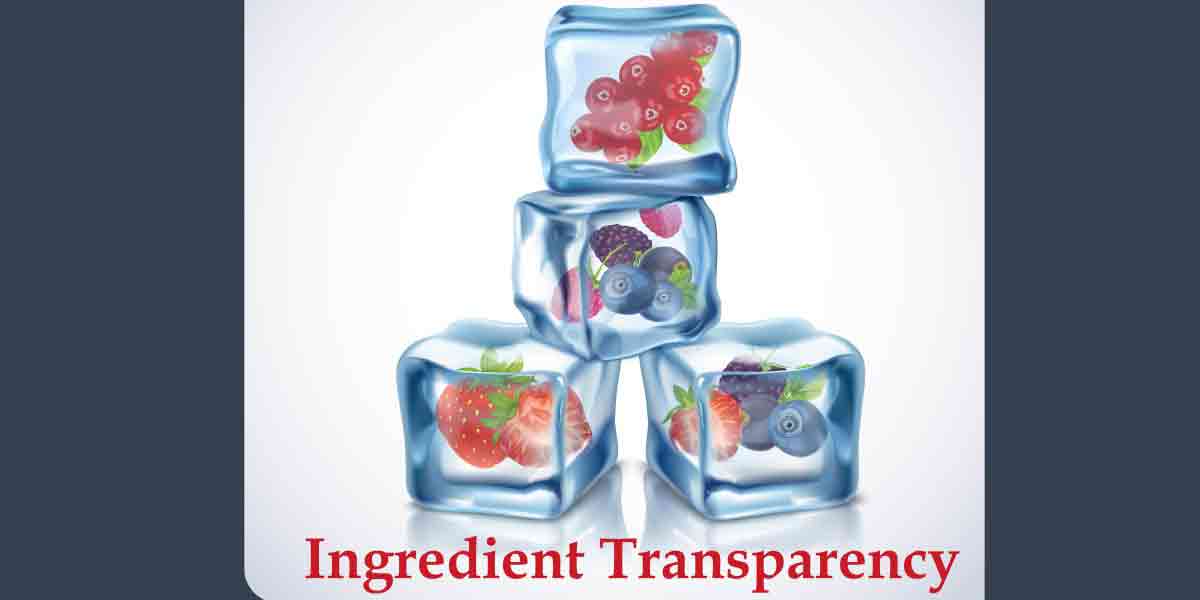 September 9, 2015 – According to Innova Market Insights, the “clean label” trend definition has officially shifted to “clear label,” as clean label shifts globally. However, Innova’s Head of Research, Lu Ann Williams, wonders if it has evolved even further. “Maybe it’s ‘clean conscience’ or ‘clear conscience.’ It’s about wanting to feel good about what we eat,” she said during her presentation, “The Global Clean Label Phenomena: Trends, Insights & Implications.”

Innova’s latest data shows that consumers believe clean label means no preservatives (49%), no artificial flavors (47%), no artificial colors (39%) and no artificial sweeteners (35%). But this is only a narrow part of the consumer mindset, Williams said.

Consumers are demanding more clarity, in general. Looking around the globe, it’s easy to see what’s to come. As of April 2015, meat providers in Europe have to indicate the animal’s country of rearing and slaughter. In Australia, there’s a proposal to clear confusion on labels that would require a product with more than 50% imported ingredients to be labeled “made in Australia with mostly imported ingredients.”

Though not a new trend, brevity and understandability of ingredient labels are still paramount. A growing number of consumers find it important to recognize most of the names on ingredient lists, with Australia (71%), UK and France (68%), and China (65%) leading the charge–and the U.S. (37%) catching up. 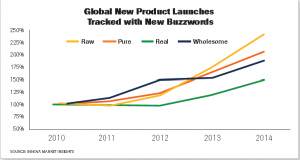 Global New Product Launches with Buzzwords (Click on image for downloadable pdf of the chart.)

In terms of verbiage, a few buzzwords, in particular, have made big gains in recent years. Innova tracked global new product launches (NPL) that used the terms “real,” “wholesome,” “pure” and “raw” from 2010-2014. Instances of “real” and “wholesome” have risen 52 and 88%, while pure and raw went up 106 and 141%, respectively.

“Naturally sweet” and “naturally occurring sugars” are growing, as well, with global NPLs in this arena increasing by 145% from 2010-2014. Examples include candy products using “real fruit” claims and soft drinks like Pepsi—which re-launched in June 2014 using prominent “made with real sugar” labels.

Similarly, the “superfood” label claim continues to grow, especially in cereals, where NPL instances saw 372% growth since 2009. A few other terms of interest are paleo, for unprocessed foods; and cold-pressed, for juices and veggie drinks. “Paleo” was mentioned five times more on NPLs in 2014 than 2013, and “cold-pressed” appeared four times as often in 2014 compared to 2010.

A growing number of consumers are interested in animal welfare and additives. More than half of Europeans reported the claims “GMO-free” and “grown without pesticides” as very important when they shop. Natural coloring is another area that’s of increasing interest, and it will become a new standard, Williams said.

The penetration of all food products with natural colors has gone from 14.5% in 2010 to 17% in 2014 globally, while artificially colored products slid to just 3.9% in 2014. Preservative- and additive-free labels are likewise becoming an industry standard, Williams added, with many new products placing the claim on the front of the label. This is especially popular in baby foods and soups, as more than a third of them had “no additives/preservatives” claims on their labels in 2014 (39 and 33%, respectively).

“The rules are shifting, so it’s a very interesting time—but also very challenging for the industry to adapt to changing consumer demands,” she said.

The following summary is also included in the 2015 Clean Label Conference Magazine.